Research Explores the Link Between Alzheimer’s and Diabetes 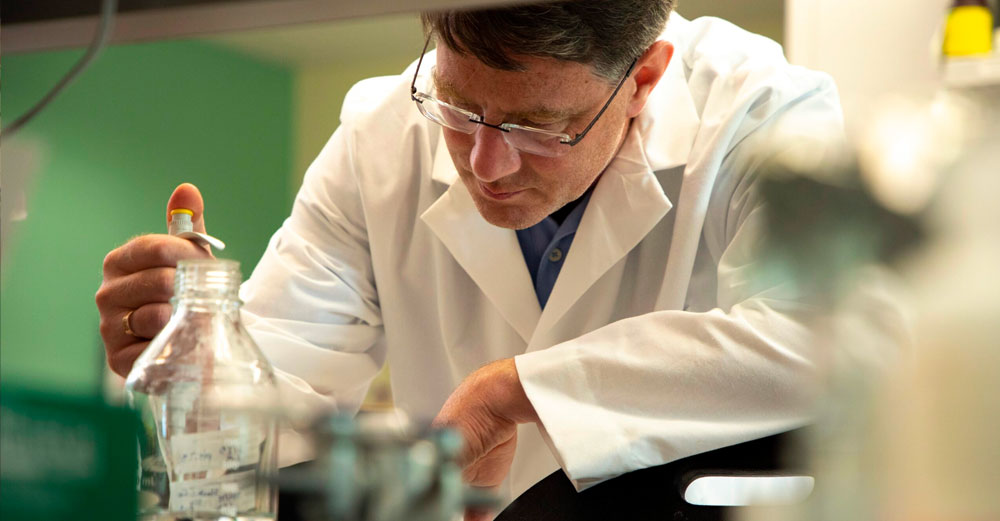 We think of Alzheimer’s as a neurological disease that causes memory loss and cognitive decline, while diabetes is an endocrine disease characterized by elevated levels of blood glucose. Ewan McNay, PhD, an associate professor of behavioral neuroscience at the University at Albany has been studying both diseases for more than 20 years. He says both illnesses are actually the result of endocrine dysfunction and disorders of metabolism.

To commemorate National Diabetes Awareness Month and National Alzheimer’s Disease Awareness Month, we sat down to talk with Dr. McNay about what we can learn from his research.

How is Alzheimer’s a disease of endocrine dysfunction?

It’s been known for a while that patients with Alzheimer’s have hypometabolism in specific regions of the brain. That means their brains use less fuel than normal in regions responsible for memory and emotional regulation, which are the key cognitive deficits.

Our work, together with that of others, has shown that this is likely caused by impaired insulin signaling in those brain regions. Just as it does in muscle or fat cells, insulin helps to usher glucose into neurons at times of high demand, like when we’re doing a memory task or a tough crossword puzzle. When that signal is missing or impaired, the neurons can’t get the fuel they need to support rigorous cognitive processes.

Does that make diabetes a cognitive disorder then?

Yes. In the same way that Type 2 diabetes can lead to kidney disease, retinopathy, and heart disease, so too is it a disorder of cognition. Diabetes is a systemic disease that affects our entire body, including our brains.

It’s important to clarify that we’re talking about type 2 diabetes. Type 1, where the body does not make insulin, is less common and a completely different disease; it doesn’t cause cognitive impairment. Type 2, where the body stops responding to insulin is called insulin resistance. The resistance impacts the brain as well as the body, and it’s that brain insulin resistance that causes cognitive problems.

Both diseases are becoming increasingly common. How are they linked?

There are several mechanisms by which they’re linked. One of the most prominent is directly at the insulin receptor. Insulin and beta-amyloid, a protein that builds up in the brain of Alzheimer’s patients, are both broken down by insulin-degrading enzyme, or IDE.

Beta-amyloid is normally part of the brain’s defense system against trauma – it doesn’t exist just to give us Alzheimer’s. That’s a big part of why repeated head trauma – such as we see in American football or boxing, or with multiple concussions – is so damaging. It causes a progressive buildup of beta-amyloid and other proteins to abnormal and damaging levels. 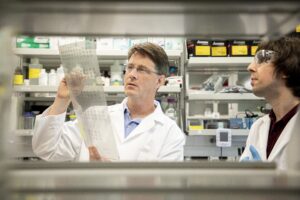 Ewan McNay, an associate professor of behavioral neuroscience in the Department of Psychology, is seen in his lab at the University at Albany Life Science building on July 19, 2019. (photo by Patrick Dodson)

Type 2 diabetes causes hyperinsulinemia, or too much insulin to be released from the pancreas, which takes up all of the IDE capacity. As a result, beta amyloid is not broken down properly in the brain and instead accumulates in small clumps called oligomers. Those oligomers then bind to the insulin receptor and prevent insulin from activating it. This creates a vicious spiral where the insulin elevation has caused impaired insulin signaling, so the body tries to make more insulin to overcome that, which makes things progressively worse.

What is the role of insulin in memory?

One key role is to facilitate glucose supply when the brain needs it to make or form memories. Insulin also appears to directly regulate cellular excitability, so that the neurons involved in forming a memory find it easier to fire and make those connections, but we are still learning about that. One thing our lab is looking at is the different mechanisms by which insulin modulates both the formation and retrieval of memories. It is looking as though there are distinct mechanisms in play at those two different stages.

Your research looks at GluT4 as a key player in both diseases. What does GluT4 do?

GluT4 is the insulin-regulated glucose transporter. Think of it as being like an extra Uber driver during a surge in passengers; it’s only active during times of peak need to get glucose out of the blood and into cells. At baseline, when you’re not thinking especially hard, it sits inside the neurons in small storage vesicles. When insulin binds to the insulin receptor at the cell surface, it causes GluT4 to go up to the cell surface, which gets more glucose into the cell and boosts energy production.  In animals or people with type 2 diabetes and/or Alzheimer’s, that signaling process is disrupted, so less GluT4 is activated. That causes the impaired metabolism and cognition.

Knowing this information, what do you advise people do to prevent both diseases?

The biggest thing is to go to the gym! One thing I repeatedly reinforce to my psychology students is that the brain does not float in a vat some place. It’s part of the biological system that is your entire body. Things that affect the body – like insulin resistance – therefore affect the brain. If you’re inactive and have a poor diet, that’s not only going to make you obese and sluggish (and at increased risk for heart disease), it’s also going to impair blood flow to the brain, lower metabolism, and so on.

What got you interested in this research? Do you have a personal connection to either disease?

I started out looking to understand why a glucose drink – like Gatorade – can temporarily boost your memory and other cognitive abilities. Then I got interested in the flip side, things that can harm your brain’s metabolism. Happily, I have no family with Alzheimer’s, but my work does give me strong motivation to get me and my family out running. There’s no treatment for Alzheimer’s. You have to start preventing it decades earlier and avoid getting on the path.

What’s next in your research?

We’ve been probing the exact molecular mechanisms of both insulin and beta-amyloid. We’re also looking at some small proteins related to insulin, called insulin-like growth factors. Insulin itself is a growth factor, and may perhaps promote survival of new neurons and synapses. That’s the next question we hope to answer.

Winnie Yu is a writer in the Office of Communications at SUNY System Administration.