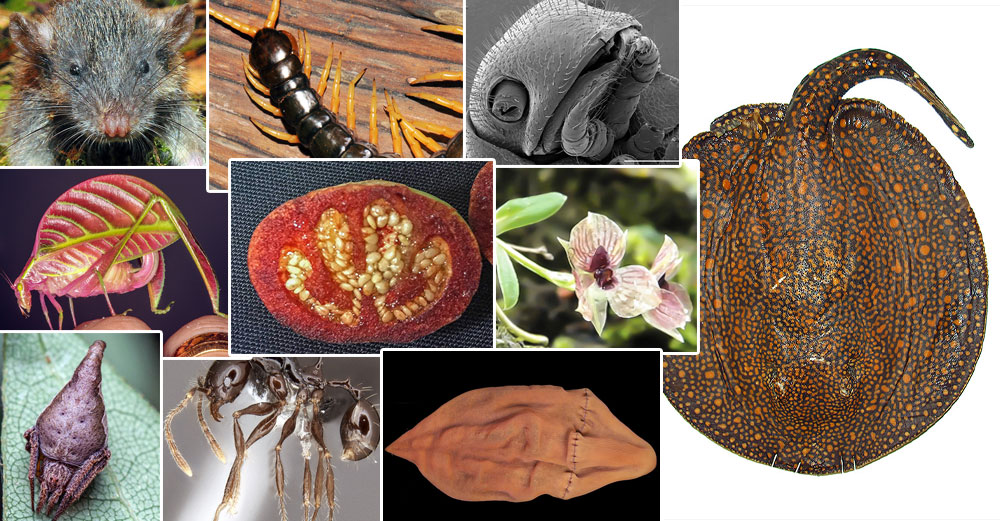 Lions, tigers, and bears… or bugs, worms, and tomatoes? The outdoors is crawling with more animals and critters than we can count. The diversity of our ecosystem is truly astonishing, but it’s also always changing. Species are disappearing thanks to changing conditions while other new species are being discovered thanks to scientific research. Leading the discovery of new species is our own SUNY ESF and the ESF International Institute for Species Exploration (IISE), who releases a list of 10 new species annually. The Top 10 New Species of 2017 features a rat, centipede, flower, and tomato among other unique living organisms.

The annual list of new species is nearing its 10 year anniversary. The first list was compiled in 2008.

ESF President Quentin Wheeler, who is founding director of the IISE, said “During the decade since our first Top 10 list, nearly 200,000 new species have been discovered and named. This would be nothing but good news were it not for the biodiversity crisis and the fact that we’re losing species faster than we’re discovering them. The rate of extinction is 1,000 times faster than in prehistory. Unless we accelerate species exploration we risk never knowing millions of species or learning the amazing and useful things they can teach us.”

So let’s learn about all these new discoveries below, as per SUNY ESF and their researchers. 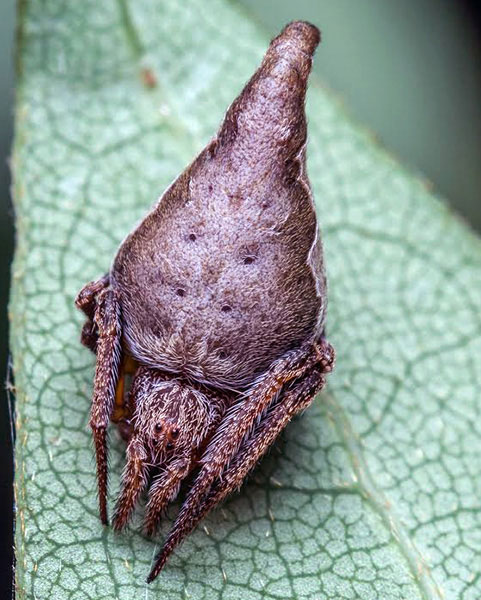 This tiny spider, less than 2 mm (a tenth of an inch) long, takes its name from the bewitched Sorting Hat in J.K. Rowling’s beloved Harry Potter books. The shape of the spider’s body – conical, with a jaunty bend at the narrow tip, is reminiscent of the hat first owned by the famed wizard Godric Gryffindor. The scientific publication describing the discovery states the name is “an ode…for magic lost, and found, in an effort to draw attention to the fascinating, but oft overlooked world of invertebrates, and their secret lives.”

The spider is well camouflaged to resemble the dead, dry, brown leaves among which it hides during the day. Known from a single specimen, the species is believed to be nocturnal in forests of central Western Ghats, India, where evergreen and semi-evergreen vegetation is surrounded by deciduous trees. The spider builds a vertical, orb-shaped web. No male has yet been discovered. 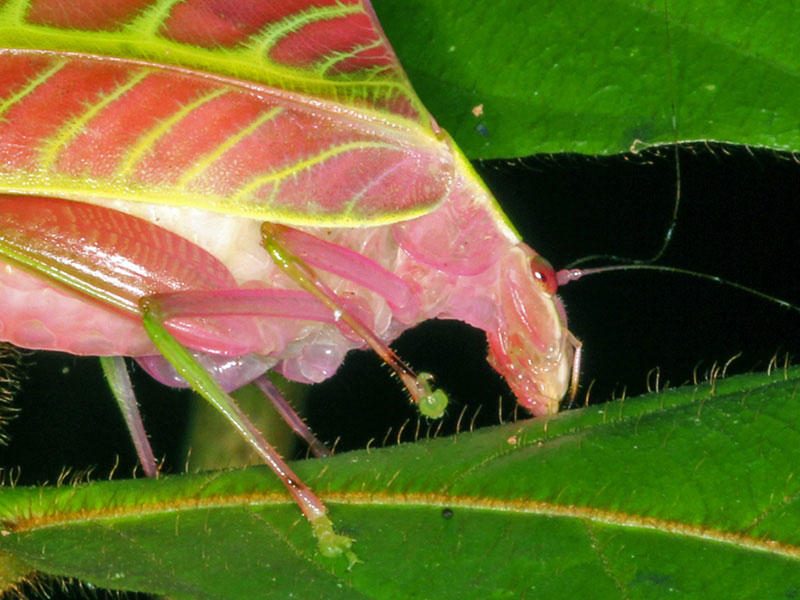 Some discoveries are made when least expected. This spectacular new species of katydid was discovered while researchers were looking for tarantulas and snakes in Borneo.

Named for the photographer of the only known specimen, Peter Kirk, Eulophophyllum kirki’s most striking feature is its use of color and mimicry to blend into the foliage. The katydids are about 40 mm (1.5 inches) in length with the males uniformly green and females brilliant pink. The newly named species is amazingly leaf-like in appearance, including hind legs that are smaller, yet similarly leaf-like in shape and detail.

Because it was discovered in a highly protected area, collecting permits could not be obtained and no specimens were collected. This creates the potential of confusion in the future as similar katydids are discovered and illustrates tensions between the advancement of science and well-intentioned regulations on collecting. 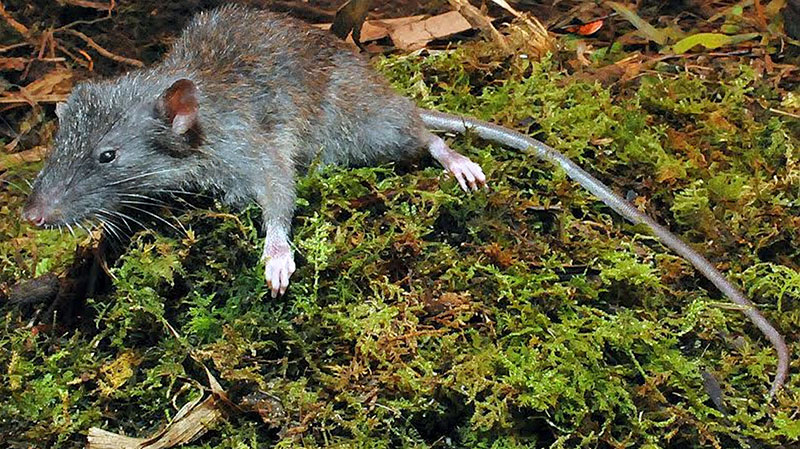 In what appears to be an evolutionary reversal, the newly discovered Sulawesi root rat dines on both plant and animal matter, making it unique among its strictly carnivorous relatives.

The rat is known to sometimes feed on roots, and the name G. radix is derived from the Latin word for “root.” It is most closely related to the Sulawesi water rat, with both belonging to a larger group, including shrew rats.

Found only on Sulawesi Island in Indonesia, the rat is small and slender, with gray-brown fur, rounded ears, and a sparsely haired tail. Seven new species of rodents, representing four new genera (including this one), have been found since 2012, suggesting there remain many unknown rats in the fauna of Sulawesi. 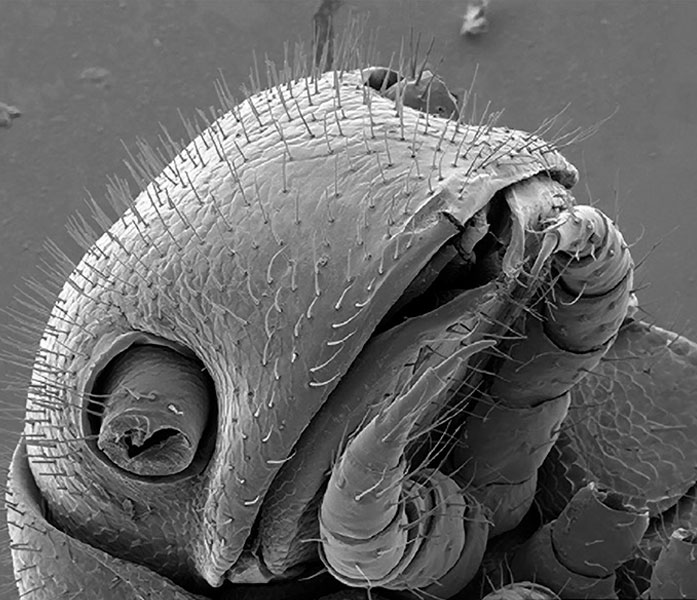 With more legs than the Rockettes’ Christmas Spectacular, Siphonorhinid millipedes can possess as many as 750 legs. With 414 legs, this new species has not yet broken the record number, but that could change. These animals continue to add body segments – and legs – throughout their lives.

Long, thread-like – about an inch (20 mm) in length – and eyeless, I. tobini boasts an ancient lineage dating from before the breakup of the supercontinent Pangaea more than 200 million years ago. Discovered in Sequoia National Park, it lives in minute fissures and cracks below the soil surface.

In addition to notable legginess, it also has bizarre reduced mouthparts probably associated with a liquid diet, four legs modified to transfer sperm to females, silk-secreting hairs, and paired nozzles on each of its 100-plus segments that secrete a defense chemical of an unknown nature. 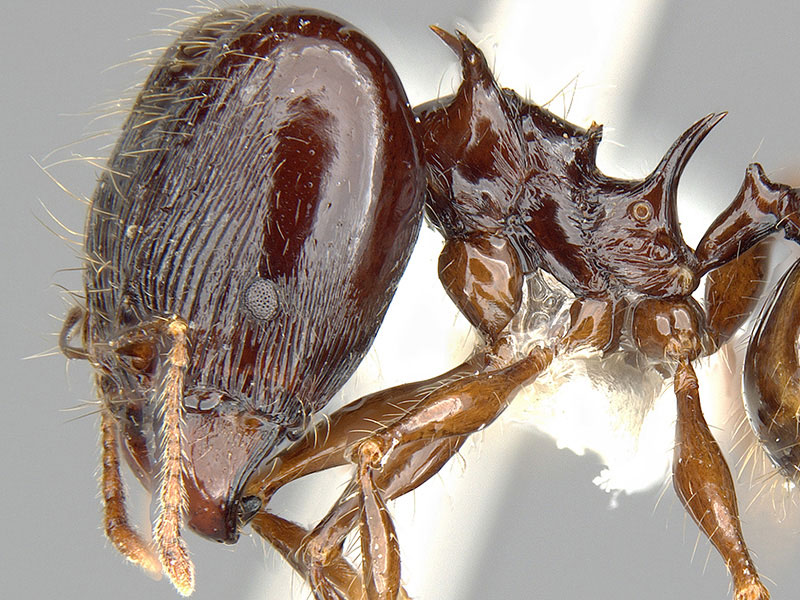 With their spiny backs reminding scientists of a dragon, this new species of ant is named for Drogon, the fierce black dragon commanded by Daenerys Targaryen in the epic fantasy, Game of Thrones. Pheidole drogon is one of two new species of spiny ants from Papua New Guinea.

Previously, large back spines were assumed to be a defense mechanism. However, microtomography – similar to medical CT scans – suggests at least some of the spines serve as a location for muscle attachment. Major workers, or soldiers, have exceptionally large heads and mandibles used to crush seeds otherwise inedible to them. Large heads require large muscles that must be anchored somewhere, such as the spines. However, spines occur also in minor workers, with smaller heads, and not all spines are host to muscle attachment. 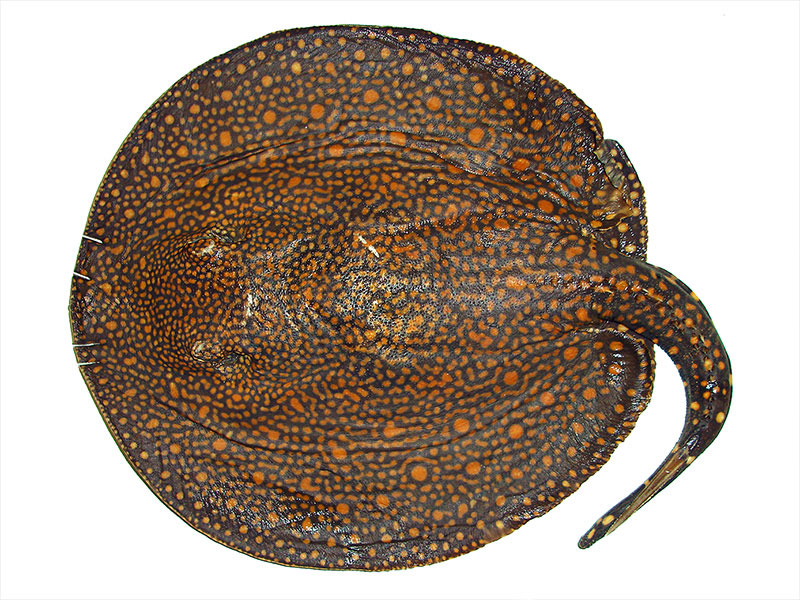 This large, strikingly patterned freshwater stingray is endemic to the Tocantins River in Brazil. The type specimen is 1,110 mm (43 inches) in length; large specimens may weigh up to 20 kg (44 pounds).

P. rex is among the 35 percent of the 350 documented fish species in the Tocantins River that are found nowhere else on Earth. The stingray is blackish to blackish-brown in background color, with intense yellow to orange spots that, combined with its size, earn it the title “king.” The discovery of such a large and brightly colored ray highlights how incompletely we know fishes of the Neotropics. 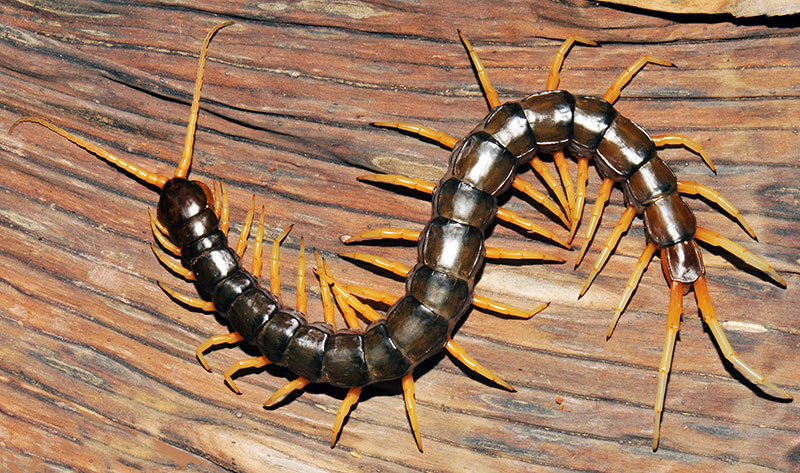 This new centipede is black, has 20 pairs of legs and is up to 20 cm long (about 8 inches). It is the first species of centipede ever observed to be able to plunge into water and run along the bottom in much the same manner as it does on dry land. Its name, “cataracta,” is Latin for waterfall.

The species, with its surprisingly adept swimming and diving abilities, was discovered under a rock but escaped into a stream where it rapidly ran to and hid under a submerged rock. A member of the predominant centipede genus in tropical regions, the centipede’s amphibious ability is unprecedented. Its population status is of concern because of habitat destruction, including tourist activities, along streams and river embankments where the new species is found. 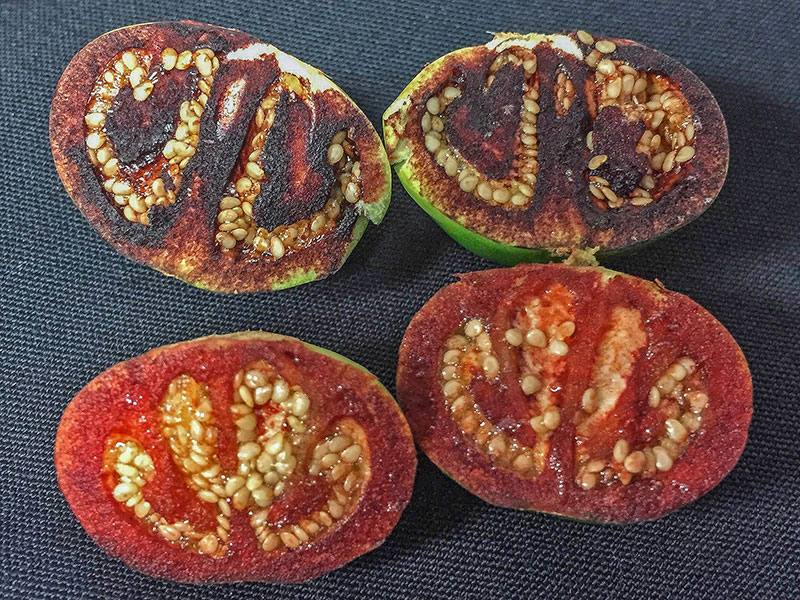 The name of this new species was chosen with help from 150 seventh-grade life science students in Pennsylvania. Young fruits stain blood red when cut before maturing into a dry, bony state; therefore, the final choice combines the Latin “ossi” for bony and “cruentum” for bloody.

The woody plant is an upright, clonal shrub growing to 1 to 2 m (3 to 6.5 feet) tall, forking at about a third its height into two or three stems. The fruit is a berry 1.5 to 2.5 cm (less than an inch) in diameter. When cut, its flesh oxidizes from whitish-green to blood red. Mature fruits change from light green to dark green, then chestnut brown, becoming leathery and bony hard. It is likely buzz pollinated by bees and the spiny fruits distributed in the fur of animals. While species status is new for this bleeding tomato, it has been known to botanists for 50 years, once erroneously considered a variation of the related species S. dioicum. 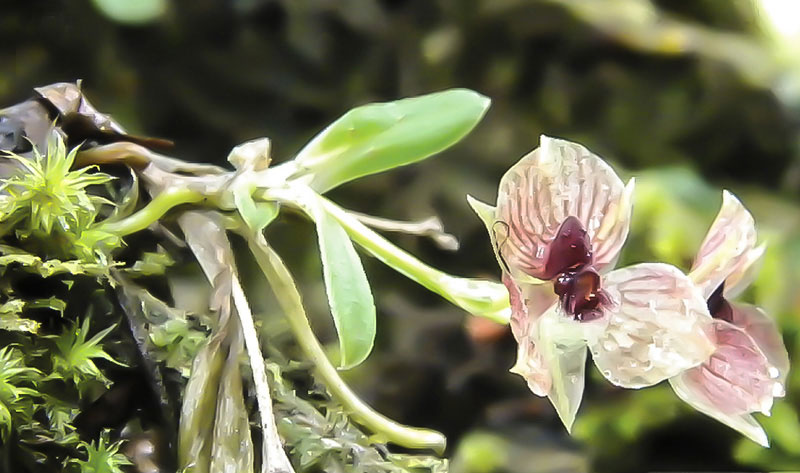 They say the devil is in the details. In this case, it’s in the orchid. The new species Telipogon diabolicus has a reproductive structure derived from the fusion of male and female flower parts into one that bears a striking resemblance to depictions of the devil’s head.

Considered critically endangered, the species is known only from southern Colombia where it is an epiphyte – a plant that grows harmlessly on another plant in moist, dwarf mountain forest. The orchid is known only from one highly vulnerable location currently threatened by reconstruction of a road that will negatively impact its habitat. There are about 3,600 species of orchids in Colombia alone, with hundreds of new species awaiting discovery. 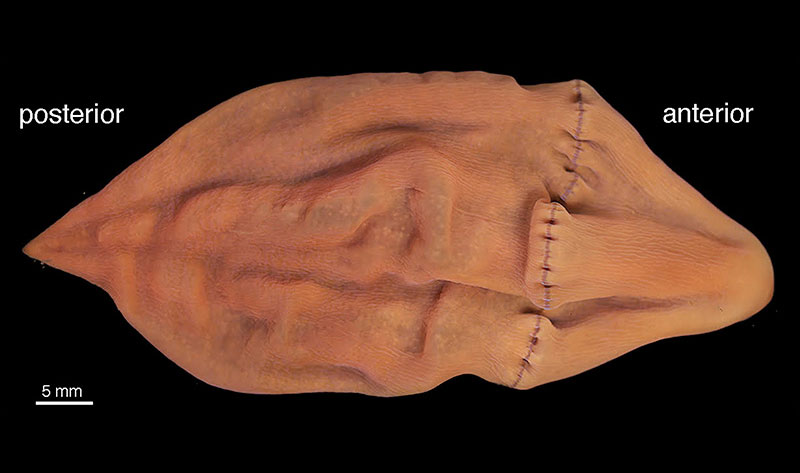 Discovered deep in the Gulf of California, 1,722 meters (about 5,600 feet) below the surface, Xenoturbella churro is a 10 cm-long (4-inch) marine worm, one of half a dozen species now known in the genus. It is representative of a group of primitive worm-like animals that are the earliest branch in the family tree of bilaterally symmetrical animals, including insects and humans.

Like some of its relatives, X. churro is believed to feed upon mollusks, such as clams. The new species is uniformly orange-pink in color with four deep longitudinal furrows that reminded the authors of a churro, a fried-dough pastry popular in Spain and Latin America. These primitive creatures have a mouth, but no anus, and are a reminder of the amazing biodiversity found in the world’s oceans.

Big Ideas is the Blog of The State University of New York, published by the Office of New Media.