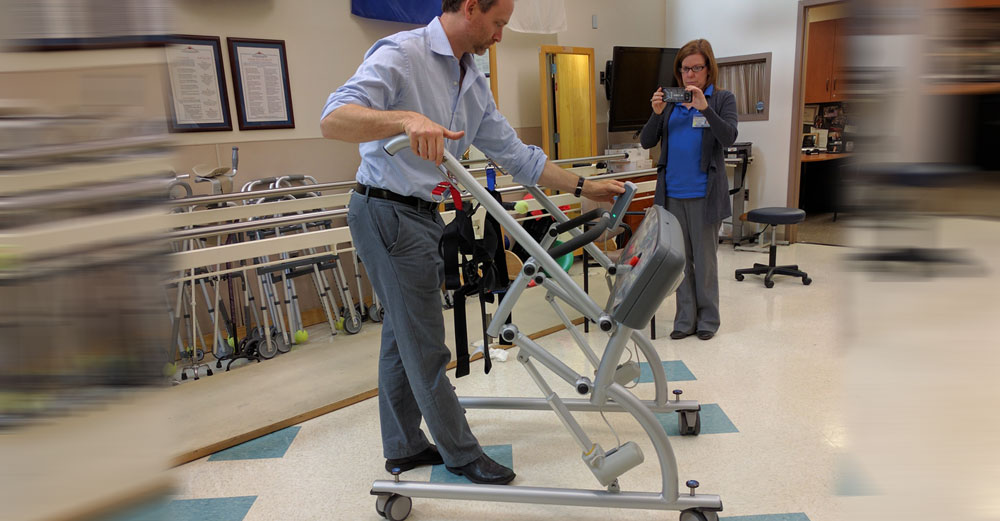 Takes all of about two seconds, one of the easiest things to do, except for a bit of grunting once that particular age sets in.

But it uses most of the body’s major muscle groups, stresses tendons and ligaments and requires both fine and gross motor skills.

Notice how your body tilts forward as your legs push up. See how your head moves? And if you can’t feel it yet, you’ll someday notice the pressure on knees and ankles. It’s a horrendously complex maneuver.

Now try standing up when you have a neuromuscular disorder – Multiple sclerosis, Parkinson’s disease, ALS – take your pick.

You get a glimmer of the inspiration for the first product funded by New York’s Technology Accelerator Fund to go to market.

All for a cup of coffee.

Dr. Anurag Purwar, a research associate professor of mechanical engineering at Stony Brook University, wanted to help just one person, Dr. Hari Pillai, who has post-polio syndrome, a degenerative effect of polio that includes muscle atrophy, joint weakness and quick fatigue. Pillai wanted someone to design him an affordable device that could help him stand and move on his own.

“Once I was up, I could walk,” Pillai said. But the only devices that could do that – essentially a crane – couldn’t move with him. And he couldn’t control it himself. “There aren’t many devices that are portable and under user control.”

Pillai also needed more support moving than a basic walker could provide, but not as much as powered exoskeletons, which can cost $40,000 or more.

Purwar and his team began in 2007 breaking down and analyzing how the body works. Standing up was top on the list. If you can’t get up, you can’t go.

“It’s more complicated, biomechanically, than anything else in daily life,” Purwar said.

Stand on one foot.

To get an idea what a person with a neuromuscular disorder must cope with, hold your leg high behind you and bend over. Feel how your ankle adjusts your balance dozens of times every second? Or if it doesn’t, feel how helpless you are as you topple over?

Yet you stand on one foot every time you take a step.

Purwar needed to account for those minute variations in biomechanics. And as he began to separate the biomechanical processes of standing from ambulating to simply balancing, he realized he couldn’t do it all. “If you try to do everything, you end up creating a monster and that doesn’t help anybody,” he said.

So he picked standing, to start, and created a device to help do that, and to help a person balance. It gets a person up from a seated position in about 25 seconds. The state’s Strategic Partnership for Industrial Resurgence and Center for Biotechnology provided early funding. He had a prototype working by 2009.

TAF gets it moving

And it sat for three years, until the SUNY Technology Accelerator Fund (TAF) invested in Purwar’s idea. “It kind of forced me to look at it from a business point of view,” he said. His intent was to help one person, but the device, with some re-designing, could help thousands, even hundreds of thousands of people.

TAF connected Purwar with an outside consultant who reviewed both the technology and the marketplace.

“With that report, we had some confidence this was going to work,” Purwar said.

That pushed him to re-design the device to cope with other needs and to develop a business plan. The strategic partnership and biotechnology center provided more money. “Things moved very fast from that point on,” he said.

The TAF investment primed the pump, said Donna Tumminello, assistant director of technology licensing and industry relations at Stony Brook University. “A little funding and an entrepreneur who was forward looking were key ingredients,” she said.

That entrepreneur was Biodex Medical Systems of Shirley, N.Y. The TAF findings showed a market, so Biodex began carving a niche.

Stony Brook licensed the technology to Biodex for use in nursing homes, assisted-living facilities, physical therapy and other professional offices, said Ed Behan, vice president of marketing for Biodex.

That’s because the device helps more than the patient, Behan said. Nurses and therapists who need to help people stand and move spend a great deal of time and risk their own injuries to get patients ambulatory. The mobility assist device takes some of the load off.

Not that professionals saw that at first, Behan said. “You bring a product to market and the therapists are stand-offish,” he said. But a Veterans Administration facility agreed to take a look. “Eventually, one tried it. The biggest skeptic ran it through the building. We just stepped back and watched it organically sell itself.”

That was 2013, one year after the TAF grant was awarded.

Biodex off and running

Biodex’s license functionally splits the technology Purwar developed in a couple of directions. It’s not developing the product for home use in an insurance-reimbursed product.

Biodex modified the product to meet the professionals’ needs: a sturdy device that can fit through 36-inch doors with a tight turning radius. It operates with a professional’s assistance.

A home-based device – for which Tumminello said Stony Brook still maintains the licensing rights – would have different design and price point requirements. And that may come in the future through another company.

“We’ve gotten emails from all over the world about how to get one for their mother or father,” she said.

Biodex’s device is now in pre-production – 10 devices under construction, Behan said. They’ll be placed in facilities likely to generate interest, and business. The list price is $5,895.

The pre-production devices will move out the door in early 2017, he said. Then mass production begins.

The Biodex device, which started as a way to help one person stand up, will be the platform from which an entire family of devices will operate, Behan said.

Purwar started with the first, most critical, step in getting from Point A to Point B: standing up. So Biodex will use his technology as the first step to a series of products to help people move.

Here’s the challenge, Behan said. Exoskeletons are expensive. Very expensive. One goes for $40,000, another for $70,000. Some up to $120,000. Not everybody needs that much functionality, nor can everybody afford it.

Biodex and Stony Brook point the technology in different directions, but it comes from the same origin. “This worked because Anurag had a functioning prototype that we could see,” Behan said.

All for one man.

It’s too late for Purwar’s friend, Hari Pillai. He gave up his medical practice 17 years ago when his post-polio syndrome made it too difficult. In the decade since Purwar began work, it has progressed to the point that he can no longer stand.

It’s a situation more than 500,000 people in America face daily – or will face in the future. About 400,000 have multiple sclerosis, another 60,000 with Parkinson’s and 30,000 with ALS. And there’s post-polio syndrome and a couple dozen other neuromuscular disorders.

Pillai spends his days in a wheelchair now, and has for the past four years. “Unfortunately, there aren’t any devices that can help me now,” Pillai said.

But one can help hundreds of thousands of others. And it might help him yet, with the add-on technology Biodex promises.

All because one man wanted to help his friend stand up.