A Study in Biotechnology is Bringing New Vision to the Blind 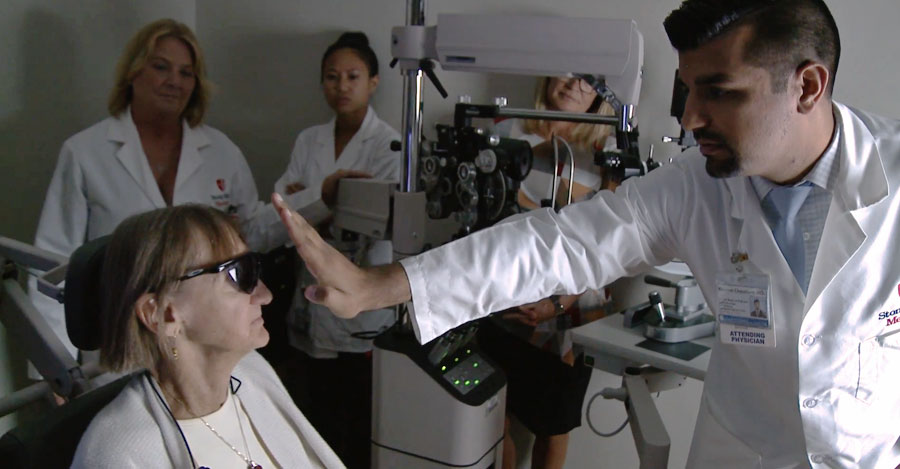 Linda Kirk had been blind for 20 years when Khurram Chaudhary, MD, a Retinal Surgeon at Stony Brook Medicine, surgically implanted her with a retinal prosthesis sometimes known as a “bionic eye.”

Soon, Kirk could see again—at least, in a certain fashion. As of January 2018, she could distinguish white shapes on a black background, locate a window in a wall and tell whether the light in a room was on or off.

“She can use this as a navigating guide and regain some independence,” says Chaudhary, who performed Kirk’s surgery in August 2017.

Kirk is one of four patients so far to receive the Argus II Retinal Prosthesis System from Chaudhary, the first physician in the New York metropolitan area to implant the device commercially. The Food and Drug Administration (FDA) approved the Argus II in 2013. Chaudhary is working with the bionic eye as part of a New Enrollment Post Approval Study, whose goal is to learn more about how patients benefit from the device.

Second Sight Medical Products of Sylmar, Calif. developed the Argus II to help patients who have been blinded by retinitis pigmentosa. This condition destroys cells in the retina, the tissue at the back of the eye that converts light into electrical signals and transmits them to the brain.

The Argus II uses a tiny video camera, mounted on a pair of glasses, to capture images and pass them down a cable to a small, wearable computer. The processor translates the images into electrical stimulations and returns them to the glasses, which then transmit those electrical stimulations over a wireless link to an implant on the retinal surface.

Based on those signals, the implant emits electric pulses that stimulate the few retinal cells still functioning in the eye. The cells pass the information encoded in those pulses through the optic nerve to the brain, which interprets them as visual images.

Chaudhary’s work with the Argus II fulfills a dream he has cherished since his days in medical school. “These people have been blind for many years, and to use biotechnology to help them is fascinating and very rewarding,” he says.

Not long after he completed his training, Chaudhary had a chance to talk with representatives of Second Sight Medical Products at a medical conference. He told them he wanted to get involved in the New Enrollment Post Approval Study as soon as possible. Officials at Stony Brook Medicine liked the idea as well, Chaudhary says. “About a year after I met with them, we were able to do the first case.”

The current research on the Argus II is important because different patients respond to the device in different ways. While Kirk has trained herself to distinguish dark and light, the second patient who received the bionic eye from Chaudhary can recognize the doctor walking down the hall. “She’s able to tell that someone is coming, wearing a very bright coat and looking a little darker on top,” he says.

Another patient, after just two or three weeks of practice, learned to identify his wife and granddaughter by their outlines and recognize dark objects against light backgrounds, and vice versa. “When he goes to the bathroom, he can see where the toilet and sink are and get a much better idea of his surroundings,” Chaudhary says.

Such anecdotes help doctors inform new patients about what to expect from the Argus II. “It’s not enough to say that the device provides ‘artificial vision,’” he says. “No one really knows what that means except the patients who have gotten the device already. The more information we can provide, the better.”

For years, people with retinitis pigmentosa have been told that medical science can do nothing for them. “They can become quite skeptical about anything that does come to market—like it’s too good to be true,” Chaudhary says. “The more patients that receive the new device, the more they will tell others in the community whether it’s actually helping them.”